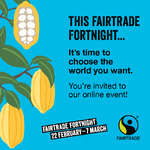 Today is the first day of Fairtrade Fortnight (February 22nd to March 7th). Each day Devizes Fairtrade Group is going to post a fact about Fairtrade. We hope you find this interesting and maybe consider some of it when you next go shopping.

What is Fairtrade: Fairtrade is a simple way to make a difference to the

lives of the people who grow the things we love. This is achieved by


History: The Fairtrade Foundation was started in the UK in 1992 by CAFOD, Christian Aid, Oxfam, Traidcraft the World Development Movement and the National Federation of Women’s Institutes.

The Fairtrade Mark: You can tell that a product or its ingredients
have been fairly traded by looking for the Fairtrade symbol. It was adopoted on 2002. It looks like  this:-

The blue stands for potential and the green for growth. (Or you can see it as a producer waving!)

Local Versus Fairtrade: Many people think that by supporting Fairtrade they will be choosing over local farmers and workers but Fairtrade focuses mainly on products such as coffee, tea and bananas that can’t be grown in temperate climates.

Products: There are now over 6000 different products available in the UK from sugar, tea and coffee to flowers, clothes and jewellery.

Tea: An estimated 70,000 cups of tea are drunk every second yet tea


farmers and workers struggle to get a fair deal. One in four children in

Chocolate: Chocolate was the first product to be certified Fairtrade in


the UK. The chocolate market is huge and very profitable. In Britain


earn on average $1 a day - well below the subsistence level. In other

Gold: We all love a bit of bling but how often do we stop to think about


where the gold comes from? Gold mines can be hazardous places, with


and using harmful chemicals such as mercury to recover gold. Fairtrade


Gold is sourced exclusively from mines which meet the Fairtrade Gold


Standard which must adhere to strict requirements on working


labour and protection of the environment.

Coffee: Around 125 million people worldwide depend on coffee for their livelihoods but coffee is well known for being a boom and bust commodity, having significant consequences for them. With Fairtrade, certified coffee producer organisations are guaranteed to receive at least the Fairtrade Minimum Price which acts as a safety net when market prices fall below a sustainable level.

Fairtrade Premium: The Fairtrade premium is what sets Fairtrade apart from anything else. On top of the price farmers and workers receive for their produce or labour, their community receives an extra sum of money to invest in improving the quality of their lives.


Fairtrade symbol in shop and café windows and the Fairtrade Town


signs at the entrances to the town.

Bananas: One in three bananas bought in the UK is Fairtrade and it makes a huge difference to thousands of farmers, workers and their families.

Commitment: Would you like to help spread the word


Why not join our small group of activists?  Contact Antonia Tolhurst:


on Get involved and then On Demand

Thank you for following us over the last two weeks.

Fairtrade Fortnight this year runs from February 22nd to March 7th. The theme is 'Climate Fairtrade and You.'

The Devizes Fairtrade Group will be running a Fairtrade Coffee Morning on Zoom from 10.30 am on Saturday 6th March.

A couple of short films about how the changing climate is affecting producers of things like coffee and chocolate and how Fairtrade can help them will be shown and there will be a Fairtrade Quiz and a short discussion.

You are welcome to join in for all or part of the time.

For more details or to get the link please email  patolhurst@btopenworld.com.

A more detailed programme is in the news item below.

Here is the programme for the Fairtrade Coffee

Where to buy Fairtrade

The Fairtrade Mark. You can tell that a product or its ingredients has been fairly traded by looking at the Fairtrade Mark (above). It was adopted in 2002.
The blue stands for potential and the green for growth. (You can also imagine that it's a producer waving!)

Today is the first day of Fairtrade Fortnight (February 22nd to March 6th). Each day Devizes Fairtrade Group is going to post a fact about Fairtrade. We hope you find this interesting and maybe consider some of it when you next go shopping.

What is Fairtrade: Fairtrade is a simple way to make a difference to the lives of the people who grow the things we love. This is achieved by making trade fair. It’s about better prices, decent working conditions, local sustainability, and fair terms of trade.

Since it has not been possible to have any events to remind people about buying Fairtrade products since March, due to the pandemic, the Devizes Fairtrade Group decided to hold a Virtual Fairtrade Coffee Morning on Zoom on Friday 4th of December.
The event began with showing a recording sent by the Fairtrade Foundation of a virtual event - Fairtrade Presents: 'The Women Behind Your Coffee'.
After a short discussion we then moved on to talking about Fairtrade products that we like or had seen in the Traidcraft catalogue - a photo of one of these - a mini chest of drawers is above.
While engaged in the Zoom discussions we were drinking Fairtrade coffee or tea and eating some cakes or biscuits that we had made using Fairtrade ingredients. These were Fairtrade Peanut Butter Cookies, Fairtrade Mango Squares and Fairtrade Courgette Cake. These were sent by email to the participants who wanted them after the event.
As a result of the discussion around Fairtrade products we like, some people were able to give orders to two members of the group who supply Fairtrade products marketed by Traidcraft.
We plan to have a similar event to mark Fairtrade Fortnight which starts at the end of February.

200g Fairtrade sugar (available in Sainsbury's, M&S or the Co-op)

Mix all ingredients together. Roll into balls about the size of large marbles. Place on a baking tray and press lightly with a fork. Cook 8-10 minutes at 180 degrees C.