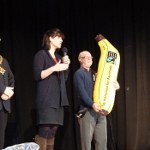 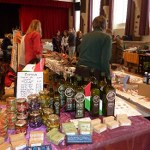 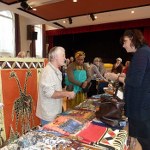 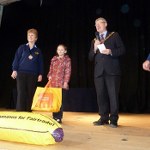 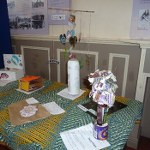 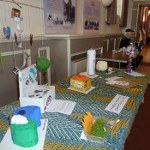 During Fairtrade Fortnight 2013 the Devizes Fairtrade Group held a reception in the Town Hall, Devizes with a discussion on the topic, 'Do we need to choose between Fairtrade and Local?' Panelists were David Meller the Director of Product Integrity from the Fairtrade Foundation, a local farmer Lorraine Stanton, a member of the Bradford on Avon Community Farm and a Traidcraft speaker. It was extremely well chaired by Matthew Smith from BBC Wiltshire and a very interesting and lively discussion went on.

On Saturday March 9th there was a Fairtrade and Local Produce Fair in the Corn Exchange in Devizes. The Fair was opened by Claire Perry MP and the mayor of Devizes, Kelvin Nash. There were many interesting stalls selling Fairtrade and locally produced food, crafts and clothes. The Devizes Town Band provided some great music which attracted visitors in from the Market Place and Wiltshire Scrapstore was there to help children make some fun things. Marks and Spencers generously donated a Fairtrade hamper which was raffled.

The mayor also presented the first prize in the Fairtrade Sculpture competition to Hannah Gray for her beautiful mobile using Fairtrade packaging and wrappers. The other entries in the competition were displayed at the Fair and the second and third prizes which were awarded to pupils from Nursteed Community Primary School were given to them later. The prizes were bags of Fairtrade products kindly donated by Sainsburys.

These events were once again sponsored by the Co-operative Group.