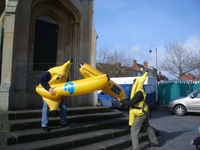 In 2009 we helped organise a Carnival of Fairtrade to celebrate Salisbury becoming a Fairtrade Diocese and the many Fairtrade Towns in Wiltshire. The mayors of all the Wiltshire towns were invited, the Bishop of Ramsbury preached at a special Fairtrade service and there were talks on Fairtrade and the problems of local producers.

Also in 2009 we took part in the Fairtrade Foundation's Go Bananas campaign. We organised banana games in the Market Place, a battle between Fairtrade and non Fairtrade bananas and gave away bananas to try to beat the record of the number of bananas eaten in 24 hours. Banana smoothies and cakes were offered at the Traidcraft stall in the Farmers Market. Prizes were awarded by the mayor to the winners of the Schools Banana Writing Competition.